This post is inspired by a recent Atlas Obscura article about the Documentation and Preservation of Plantation Slave Cabins.  At the Underground Railroad Museum in Cincinnati, Ohio (My Hometown).  It is from a Slave Market in Kentucky.  After the Civil War, with the end of Slavery, the building had been used to cure tobacco.  It was so well constructed, that when the farmer wanted to expand his ‘barn’, he built the new barn around it rather than trying to tear it down.

When the Museum was under development, the story of the Slave Market Building came to their attention.  The Current Farmer wanted a new barn, but also knew the probable history of the strange building inside the old barn.  Somehow the Farmer and Museum made contact.  The Museum torn down the old barn, removed the historic Market Building, and built the Farmer a new barn. Later, the State of Kentucky was upset to lose this historic structure.  But it is well preserved now in the Museum Lobby.

Another Place of Interest is the Hermitage Plantation, home of President Andrew Jackson.  This is one of the few plantations where Slave Cabins were openly Preserved and Acknowledged.

Since I found this article at the end of Black History Month,  I am posting it in Honor of my Father’s Birthday Today.  And I think this counts as a #WednesdayWindows posting too.

My Father’s camera was the J33, a smaller version of the J66.  We traditionally had at least an annual Ester Parade Photo taken on our front steps……This one from 1962…Me 2 years old, brother Kevin on the left and Wesley on the right.  Seems like only Kevin was cheery that day.

Below, my favorite photo of 2 year old me…..with my stuffed animals.

Front yard, back yard and on vacation in 1965…………Shown also was our first dog, Tessie. 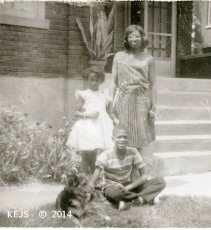 My mom in 1959 soon after she found out I was on the way………a Pre-baby photo, with Mister the Cat.

My Brother Wesley holding baby Me.  Needs some restoration.