Peace and Meditation as we wait………

So these are the primary cameras I will be using for The Frugal Film Project.

AGFA Billy Clack 74 6X9 is the January 2021 Camera I will Start with. Using Ektar 100 Film to capture the end of the Holiday Saeson.

The rest of the Cameras givin in no particular use order. I’ll just have to see what the conditions are and what’s going n that’s of Photographic interest. In other wirds, I’ll let the circumstance pick the camera and the film.

AGFA Billy Clack 51 6×4.5 I’ve had a lot of success with. So it may make more than on appearance in the project.

AGFA Isolette 6X6 shows some promise. I will probably reserve it for the faster B&W film, the Tri-X 400.

And now for the Kodak Cameras……….

Mom’s Kodak Art Deco 620 Camera. This camera needs a bit of a work out. It uses 620 format film (similar to 120 film). I’ve only put one roll of film through it. There’s no formal unboxing. M mom simply gave it to me Christmas 2019 in a cloth bag.

Kodak Jiffy Series II SIX 20, The non-Art Deco version of Mom’s camera. I have not yet tested this camera. So we shall see…….

There are also some Post-1940 cameras, such as my Grandfather’s Argus Brick, which will likely be a part of this year;s Frugal Film. We’ll introduce those cameras as I apply thm.

I am continuing to introduce cameras that I intend to used for the Frugal Film Project and My Inner Monet Most of the cameras under consideration are Pre-1940. Although the Agfa Isolette first appeared in 1937, I believe my model is Post-1940. The Isolette was one of the earliest cameras to include significant plastic in the upper viewfinder housing.

The camera features a fold-down cover.

The Isolette is 6X6 Format. And we have a surprise ‘sample’ from the first roll of film:

My Submission for the Light, Space & Time 2021 Women’s Competition: 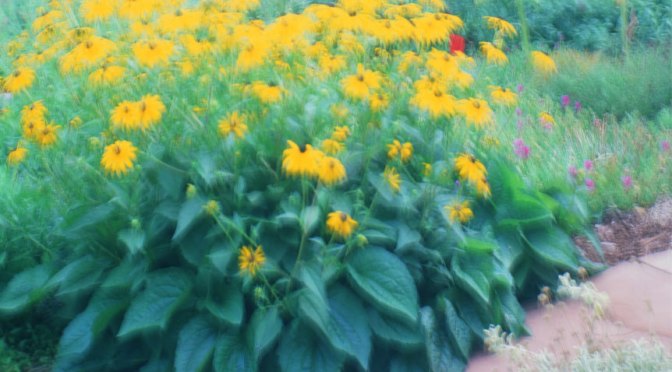 A friend recently sent me a link to a professional photographer, Jay Zukerkorn, who is dealing with the changes in his photography resulting from Parkinson’s Disease. He has tremors to deal with, but decided to work with them instead of against them.

Here are two quotes from the article that are especially pertinent to me:

“Has Parkinson’s disease changed your perspective on your art?

Absolutely. In my former career, my photos were hyper-sharp and perfectly retouched. Now I embrace these blurred imperfections.

In what other ways do your photographs speak for you?

My photos represent a new way of walking through life. I’ve had a life-altering diagnosis, which has been humbling, but it hasn’t stopped me from moving forward.”

So I no longer reject the ‘out of focus’.  Especially since I am experimenting with all if these pre-1940 cameras.  In this case My Kodak 1913 Autographic:

Then I found some problems with my right eye; a vitreous detachment. Luckily it won’t cause blindness and will probably even show some improvement. But oddly now each eye has its own specialist…….

So now I am moving in a different way (figuratively and literally) and seeing and experience the world differently. So check out some of My Inner Monet as well…….

I made a big mistake when I exposed this Frame with my 1913 Kodak Autographic No.1 But it grew on me and I decided that I liked the resultant Abstraction.

It is Fuji Velvia 50 Film. So can you guess what I did wrong?

This was such a different subject than the other images on roll #2 that I wanted to post it separately.  Calm. Peace, Stillness………Taking a few days off for long awaited eye surgery.  Update at the end of the week…….

A summary of all the Flowers from my Garden…and my Final Interpretation in case you missed it…………And Check out all of my Publications Here.